2006 was the year of Il Sole 24 Ore, another big project which absorbed me completely, and another major title in Italian journalism. Manroland Plauen put me in charge of the interpreting service in all four of the plants concerned, starting with Milan.

In this case, too, the memories come flooding back: one that comes to mind is a course on Aurosys, the gantry system for handling reels, from the German manufacturer in Augsburg. The course took place in Milan in the depths of winter, with snow outside and the doors of the space housing the reel slicers wide open. We needed an enormous air heater in order to continue. But I still remember the pleasure of supporting a technician who was prepared and organised, with a real talent for teaching. 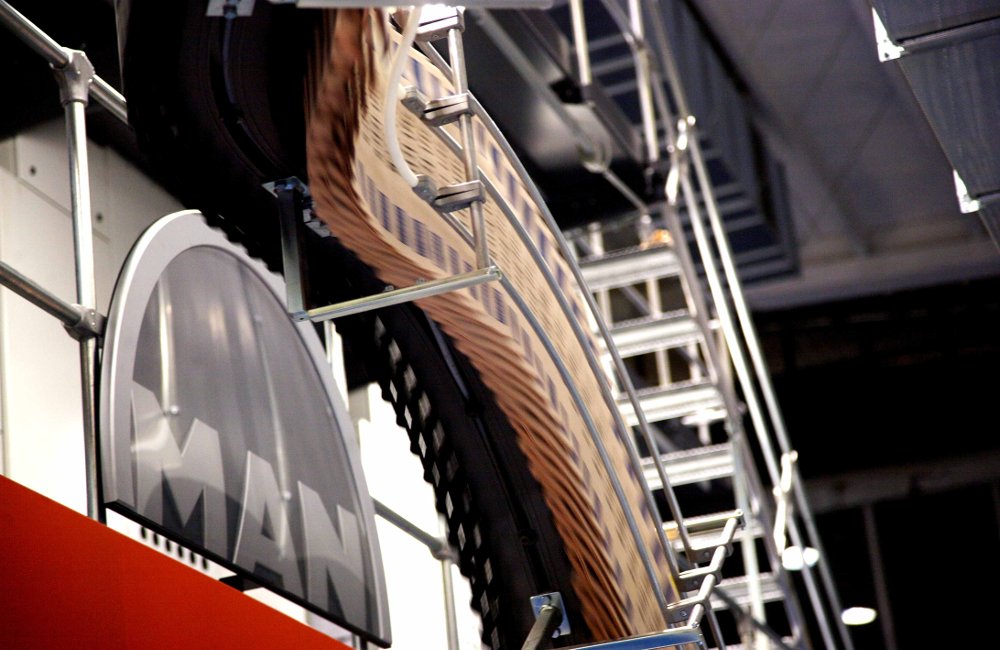 In Milan I also worked with the German and Italian technicians through many nights of production, learning many secrets, and how to listen to the machine and its noises (and believe me: when a film roller starts to whistle, it’s time to run!).

But I don’t think I ever saw so many roller adjustments as at Carsoli … the 13mm spanner is one of the souvenirs from that time which I keep in my office.

Another souvenir comes from the plant at Sommacampagna (Verona) and was given to me by the site manager: a fine brass tee-connector from the machine’s hydraulic system, which features prominently as an exhibit on my piano in the living room.

But 2006 was also the year of the football World Cup: we were all there together in Milan to watch the semi-final, won by Italy against Germany, and Italian printers and maintenance staff had a fine revenge! For the final against France, however, we were at Carsoli: many people remember it for the Italian victory and for Zidane being sent off, but I have my own completely personal memory, of an excellent smoked scamorza which we enjoyed, stuffed with cooked ham and softened in the fireplace of the agriturismo where the German and Italian technicians and I were staying, tired out by the day’s work, but satisfied.

manroland AG is one of the leading printing systems manufacturer and the world's market leader in webfed and sheetfed offset. It has production facilities in Augsburg, Plauen and Offenbach (Germany) and together with its partners, manroland operates an extensive market organization. Ms Kristina Pisa has been working for our company since 2002 as a freelance translator and liaison interpreter for the German, English and Italian languages. She provided translations of the instruction and maintenance manuals for our printing presses, of our contracts and press specifications as well as of editorial and marketing texts, and supported us during meetings and training courses held in our Training Center in Offenbach as well as at the premises of our clients in Italy, totally hundreds of days of interpretation in German, English and Italian. It is with great pleasure that we strongly recommend her as a trustful and reliable partner.