The discovery of working away from home!

From 2000 to 2009 I worked as an interpreter during technical training for mechanics, electricians, printers and operators working on the new Wifag OF 370 GTD PCU offset printing line with an EAE integrated control system belonging to Il Mattino of Naples.

A series of fortuitous circumstances brought me this far, or rather I ought to say that … destiny had a hand in the matter. 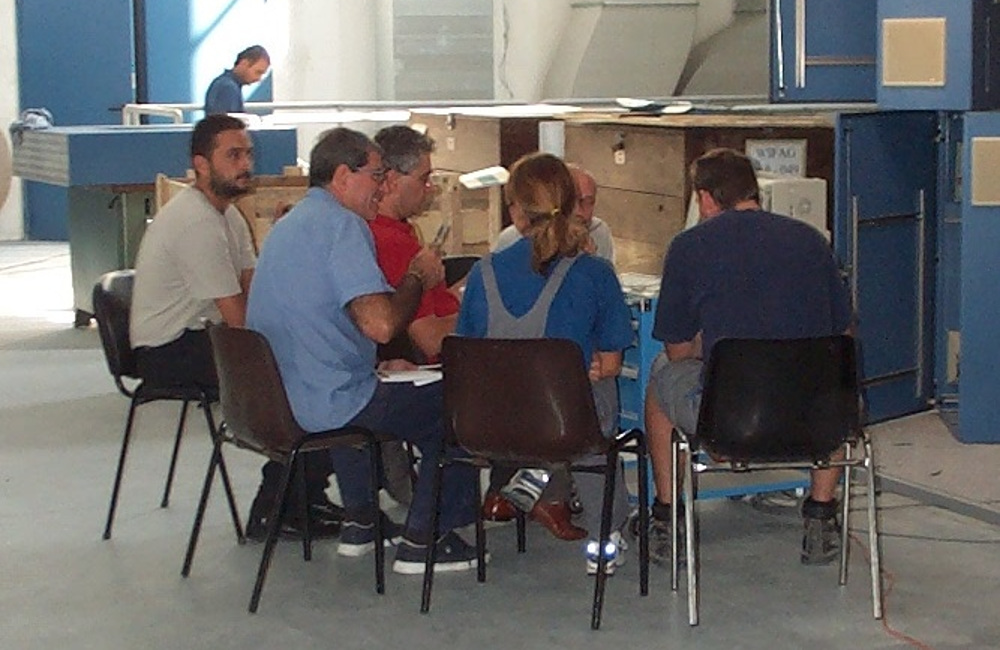 And it was thus that while I was at Il Corriere in Milan for a two-week course on programming the Advant Fieldbus 100 with ABB – for which the Swiss engineer from Dättwil had booked me after realising that he could use English or German interchangeably with me during a course that he was giving in Switzerland, as well as my explanation to the Italian engineers present of what a flip-flop circuit was – I noticed Thomas’s visiting card on the table and took the initiative in writing to him to put myself forward for any interpreting jobs for his company… I did not know that Thomas was still at Il Corriere, on the floor above mine: we met, and from then on I collaborated with Wifag, a historic Swiss printing machine manufacturer, in all its installations of modern rotary machines with an “electronic shaft”, carried out in Italy from 2000 onwards.

Naples was the first: I had to learn pages and pages of manuals; Urs and Thomas led me by the hand through the mechanics, the networks, rollers and cylinders, and I learnt with the printers the secrets of the new machine. I got to know them, the printers of the old school, who struggled to keep their eyes open because the night before they had been printing. And a little while later I would do the night shift with them. It is incredible how vivid the memory of that installation still is in my mind: these were intense months, during which I heard myself greeting the morning from the top of the rotary press “Hey blondie!!”.

The courses were held first at the Il Mattino site in Via Chiatamone, then at the new plant in Pascarola, there was the football game between the Swiss team and the Italian maintenance staff, the trip to Herculaneum and Pompeii and then on to Vesuvius, the deep blue of the sea which came into your hotel room in front of Castel dell’Ovo, the cloned Wifag corporate credit card and Urs’s enjoyment as he drove through the streets of Naples, the course held in the heat of August actually on the machine, with the rotary press wrapped in cellophane to allow the air conditioners to be tested in a work site which was still dusty, and the frowning look of the caretaker, who was worried on seeing me arrive every night at three o’clock in the morning to assist the paper-folding specialist who began work at the end of production, and finally driving onto the ship Tirrenia at the port of Palermo (where I was then living), and finding myself at 6.30 the next morning in Naples, ready to pick up the Swiss technician at the airport, or alternatively to find myself on a plane which turned back to Palermo because there was too much fog over Capodichino and, having disembarked and waiting to re-embark, finding myself being told, by the manager at Naples whom I am notifying of the delay: No problem, Dr Pisa, you arrive when you arrive, but … you did bring the cannoli (a Sicilian pastry with a sweet filling), didn’t you?”.

I was subsequently to return to Il Mattino more and more frequently, to repeat with new teams of maintenance staff the courses which covered all aspects of prepress, printing, paper store management (EAE Maflow) and mailroom (Ferag conveying lines and pack formation).